Read about the early architectural changes we just discovered.

The Cupola House was built in 1758 by Francis Corbin, land agent for the last of the English Lords Proprietors, Robert Carteret, Earl of Granville. It has been called the finest Jacobean house south of Connecticut, as well as “North Carolina’s most significant early dwelling.”

In 1777, the administrator of Corbin’s widow sold the house to Dr. Samuel Dickinson, who was married to Elizabeth Penelope Eelbeck Ormond, one of the women who signed the Edenton Tea Party resolutions. The Dickinson family and their descendants occupied the house for 141 years. 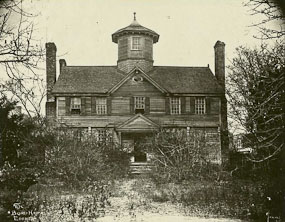 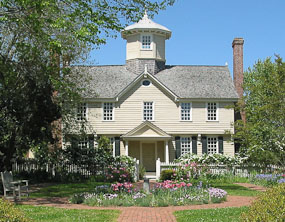 In financial straits, Miss Tillie Bond, the last of the line, in 1918 sold the elaborate Georgian woodwork from the downstairs of the Cupola House to the Brooklyn Museum. It remains on display there today. But that sale led to the organization of the Cupola House Association, which promptly raised funds and purchased the property for adaptive use. This endeavor of the local citizens has been called the earliest community preservation effort in North Carolina to save an historic structure.

Following the purchase, the house was used as a county library for 45 years. During part of that period, a tearoom operated on the first floor, and a museum occupied the second floor. In the 1960s, the Association reproduced the lost woodwork, and opened the building as a house museum. It has been furnished with period pieces, and is on the town tour of historic properties.

Views of the rear of the Cupola House. This overlooks the Herb Garden, which is in the shape of the lower panels of the doors, a known 18th century garden pattern.

In the 1970s, the Association acquired land to the north and south of the house, and reconstructed flower and herb gardens in a manner appropriate to the period.